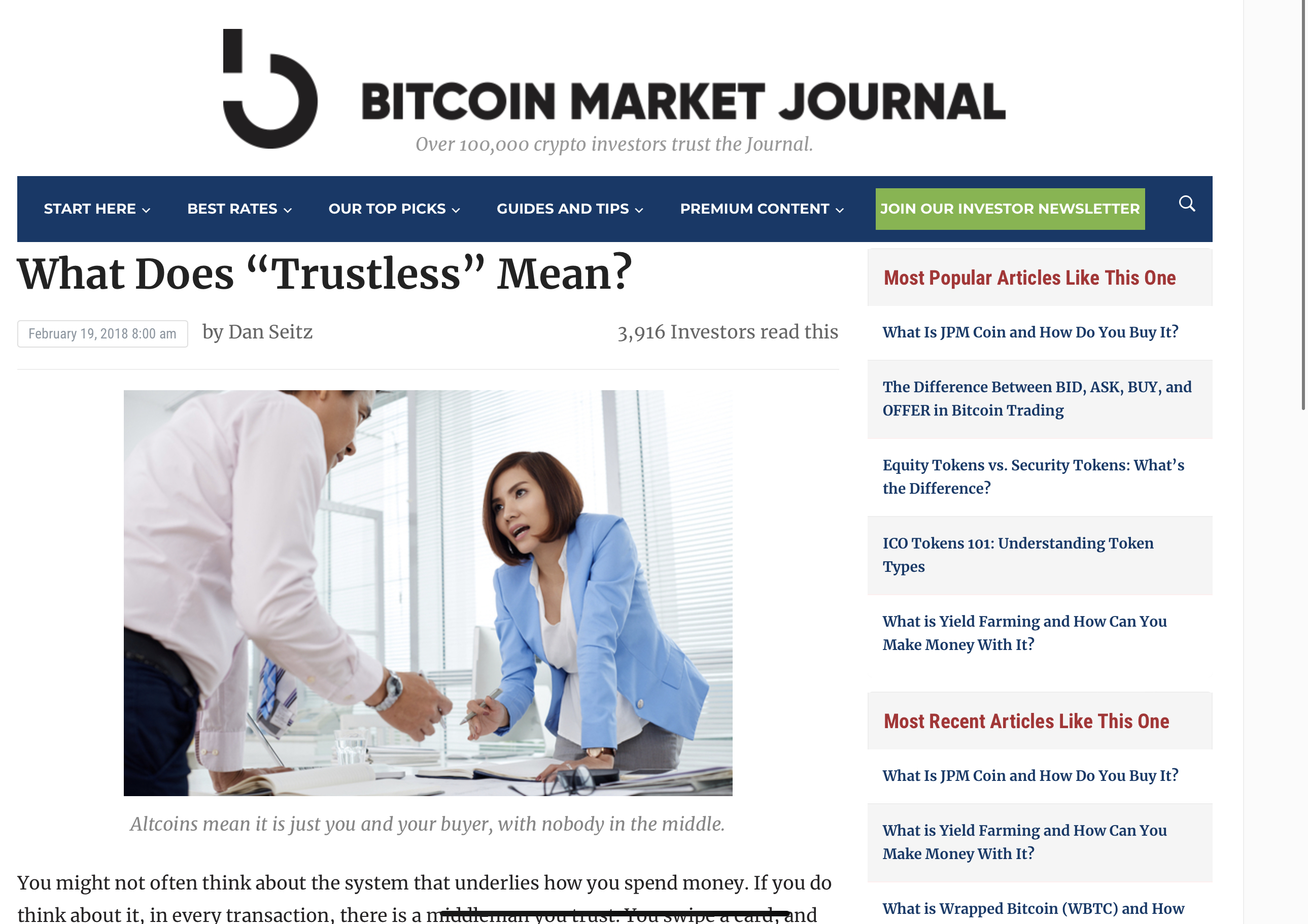 One of our key values is trust. We highly value this as it is the basis for a good and mutually beneficial partnership. At least, this is how we see it.

We strongly believe that the best sales people are actually “trusted advisors”. At INGAGE, our job is to train professionals in the insurance industry thanks to online courses, blended learning, virtual worlds, etc.

It’s fair to say, that that insurance industry has not always had a great reputation concerning trust, although I would argue that it has done some real improvements in the past years.

Now, when my friend Alex introduced me to the concept of “trustless” and insisted that it was very important, I was initially a bit puzzled. He actually talked about it as if it were good!

“Why would the lack of trust be good?”, I thought.

Dan Seitz‘ article might give you a bit of light there:

You might not often think about the system that underlies how you spend money. If you do think about it, in every transaction, there is a middleman you trust. You swipe a card, and the card processor handles the transaction, protecting both you and the merchant against fraud. You write a check, and the bank ensures you have the funds and that the other party is paid. Even paying with cash, you are using a currency monitored by a central bank, and if the cash is counterfeit, that fact will become known.

This does not mean that you should be suspicious of an altcoin transaction. In fact, the contrary is true. Why?

Let’s back up for a moment and look at the blockchain. At root, all a blockchain does is serve as a giant, public ledger. When an altcoin is mined, used as currency, or otherwise exchanged, the transaction goes on the blockchain. In order for anybody to buy and sell altcoins, their blockchains must align exactly. In other words, everybody is keeping everyone else’s books, with no central bookkeeper involved.

This is part of the system people tend to misunderstand, but it is important. Thanks to the blockchain, every altcoin transaction is recorded in a distributed ledger, meaning that it is available across multiple computers and anyone with access can see every transaction that has been recorded, all without the intervention or help of a trusted third party. You have the ledger right there in front of you, and that lets you buy and sell altcoins directly without worrying about the coins being fake. Thus, the world of altcoins is trustless, in that no middleman need be involved. You are, in effect, your own banker.

Thus, as you have understood, the fact that there is a third party that you must trust, can be an issue. The breakthrough with the blockchain is that it’s a process that ensures reliability, not a third party.